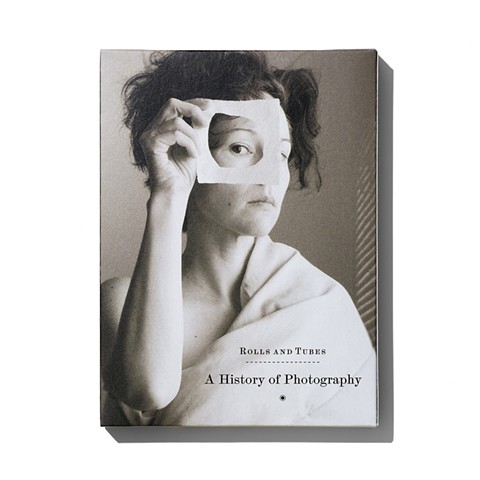 Rolls and Tubes: A History of Photography
Trade Edition 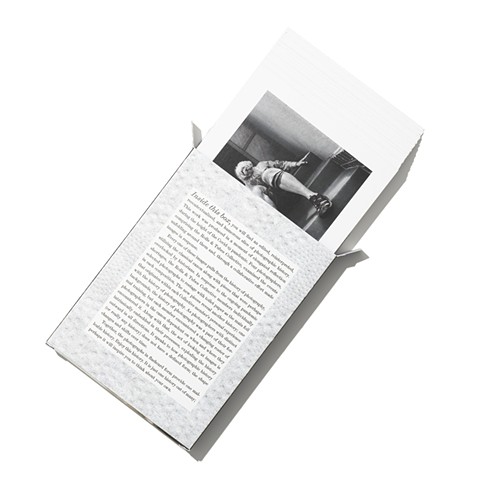 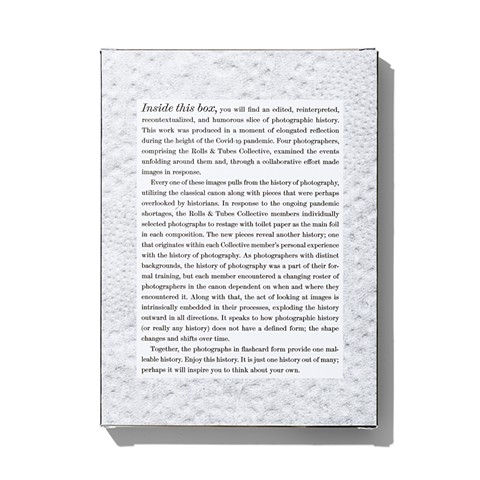 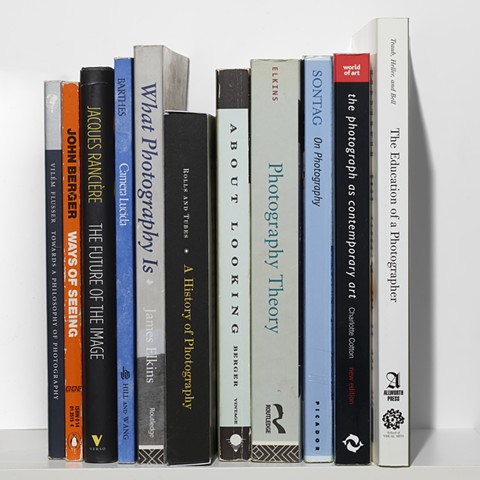 Rolls and Tubes: A History of Photography Standard Edition 2021

Signed and numbered by all four artists

On a Roll: Unspooling the History of Photography Corey Keller

Between February and March of 2020, toilet paper sales increased exponentially – as much as seven hundred percent – across the Western Hemisphere. By April, it was not uncommon to see entire paper good aisles of the grocery store completely bare. It is estimated that half of American supermarkets were entirely out of stock at some point during that month. In more ordinary times, toilet paper is perhaps an unfairly uncelebrated commodity, its value fully appreciated only in states of emergency or absence. Among household goods, it occupies a position somewhere between unnoticed and unmentionable. Yet in 2020, as the Covid pandemic spread, it took center stage to become a national fixation, subject to rationing at the store and endless memes on the internet. All our anxieties about loss of control, about the very real lives lost (some 600,000 and counting in the United States alone), and livelihoods destroyed were displaced onto this unassuming household item, as if a stockpile of Charmin might just somehow stave off disaster. Toilet paper hoarding strained the nation’s supply chain and cast an illuminating light on the American psyche. Already economists and social scientists have found that studying the impact of Covid panic on consumer shopping habits also provides a useful barometer of public mental health. The toilet roll became an unlikely symbol for a global crisis.

Commonplace and scarce, virginally blank and ultimately scatological, toilet paper embraces a surprising range of contradictions. The absurdity of the symbolic freight heaped upon it during the pandemic also made it the perfect material for an artistic project responding to the physical, social, and psychological constraints of the shelter-in-place. The four photographers who make up the collective Rolls and Tubes – Christy McDonald, Colleen Mullins, Jenny Sampson, and Nicole White – originally came together as a critique group in early 2020. Friends and colleagues, the group had only come together one time in person before the pandemic put an end to what were supposed to be monthly meetings. They pivoted to virtual meetings but struggled to produce work that felt meaningful under the circumstances. To dislodge this creative block, one member proposed a quick and dirty challenge: in two hours, re-create any photograph from the arc of the history of photography using toilet paper. The rule-bound prompt – laced with an irresistible amalgam of serious and silly – provided a sense of levity, direction, and time-bound urgency in a moment when all were in short supply. Yet what began as a lighthearted exercise evolved into a sustaining creative partnership: a year-long collaborative inquiry into the history of the medium. (For readers concerned with the impact of this project on either paper good scarcity or environmental waste, the women pledged to re-use their material for its original purpose once the photograph had been made: “no square was spared.”)

The four artists all come from different styles of picture-making, and therefore drew on very different bodies of photographs for their inspiration. Practical concerns dictated some of their choices: could the work in fact be executed with the materials at hand? The toilet tissue’s color found a more natural affinity with black-and-white photography, although they found some success in color. The re-imagined photographs span the history of the medium, from its earliest experiments in the 1840s to highly conceptual works made in the last decade. The project balances a warmly evident humor with palpable respect for the original artworks, a sentiment that the photographers discovered only deepened as they came to appreciate the complexity of the works they were attempting to replicate. Scrutinizing the photographs in order to reconstruct them, they gained new appreciation for the qualities that lent the original works their power. Many of their source photographs are instantly identifiable, requiring only a handful of specific cues to spark a collective memory of the original image, and others are far less familiar. As a set, the project asks: what transforms an image into an icon?

The premise of the challenge gave a unified outline to the project but also left open considerable wiggle room for individual voice. Some of Rolls and Tubes’s re-creations achieve a remarkable verisimilitude – Colleen Mullins’s version of Anna Atkins’s early photograms, for example, or her take on Callahan’s minimalist and calligraphic rendering of his wife Eleanor’s magnificent backside, are exceptionally convincing, allowing us to appreciate the formal power of the originals while admiring the remarkably skillful execution of the homages. The paper’s white blankness affords it chameleon-like abilities to take on the forms of seaweed and flesh with equal facility.

Other works in the series take an opposite tack: rather than disguise their materials, these photographs deliberately call attention to their own making in a way that also illuminates the conceptual underpinnings of their source material. Nicole White’s self-portrait as the Countess of Castiglione (from a decades-long series of self-portraits commissioned and art-directed by the nineteenth-century aristocrat), humorously replaces the countess’s elegant accoutrements with perforated toilet paper and down comforter but insists upon her feminine authorial presence just as fiercely as the original sitter did. White’s bathroom interpretation of Ken Josephson’s conceptual mise-en-abyme offers a similar message in its literal embodiment of Josephson’s motto that photographs are “made,” never “taken.” Jenny Sampson’s variation on Tina Modotti’s Oil Tank (1927) wittily combines the two approaches of re-creation and intervention. Her version is compositionally faithful to the original -- with the form of the paper roll representing that of the oil tank -- but is also inflected with Dada-esque humor. Though the hand lettering in Sampson’s picture is clearly meant to mimic that on Modotti’s tank, it also seems to slyly reference the bathroom-derived landmark of conceptual art: Duchamp’s sculpture Fountain (1917). His factory-produced urinal, signed “R.Mutt,” is here cheekily replaced with another ready-made, a roll of toilet paper bearing the initials “T.P.”

The collective project was also profoundly shaped by the social upheavals of 2020. What started off for many as a brief period of bored sourdough baking and minor inconvenience very quickly turned into a months-long societal reckoning with rampant illness, a collapsing economy, the ongoing legacy of centuries of structural racism, and political acrimony that was both divisive and violent. Christy McDonald’s Side Show, Berkeley, a riff on one of Robert Frank’s flag studies from The Americans (1955-56), pays tribute to a historical photograph while also offering a pointed commentary about current political events. Replacing the human figures with stacks of toilet paper in Frank’s disdainful view of the hollow political symbolism of 1950s America brings his critical assessment of the gap between the American dream and lived experience right up to the present moment. The irreverent juxtaposition of toilet paper and flag only serves to amplify the caustic wit of Frank’s original view. Sampson’s acerbic take on Barbara Kruger’s text-and-image work (2016), Loser for Rolls and Tubes, is more explicit, bringing into sharp focus the political tensions that thrummed like an angry bass line throughout the entire year. That the pandemic was not the first time Trump, paper goods, natural disaster, and a political crisis would intersect somehow defies credulity.

Over the course of a year that demanded we think more critically about inclusion, the project became something far greater than the sum of its parts: a series of four individual artists’ interpretations of great works from the history of photography posted on Instagram merged into a collective reflection on the writing of that history itself. In selecting which works to re-create, share, and include in the final edit, the four artists made deliberate decisions to celebrate some of the best-known photographers’ work while also purposefully addressing the omissions in traditional narratives. Through close looking, meticulous work, critical reflection, and – most essentially – humor, the members of Rolls and Tubes managed to transform toilet paper into a creative lifeline for themselves and an utterly unexpected and generous lens onto the power of photographic images for the rest of us. Corey Keller is a historian of photography based in Oakland, CA. From 2003 to 2021, she worked at the San Francisco Museum of Modern Art as curator of photography where her critically acclaimed exhibitions included monographic surveys on Dawoud Bey, John Beasley Greene, Henry Wessel, and Francesca Woodman as well as the thematic shows About Time: Photography in a Moment of Change and Brought to Light: Photography and Invisibility, 1840-1900. Recent writings include essays on Eliza Withington, Susan Meiselas, Ralph Eugene Meatyard, and Eadweard Muybridge, Etienne-Jules Marey, and Clare Strand. A specialist in nineteenth-century photography, she is particularly interested in drawing connections between the concerns that shaped conceptions of the medium in its earliest days and their manifestations in contemporary practice.